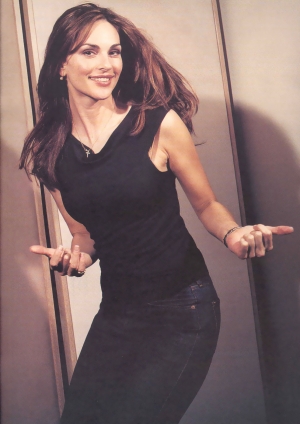 Tasha de Vasconcelos already models, acts and dates European royalty, and she is to perform at a gala performance at the Theatre Royal next week. But, says E Jane Dickson, “you ain’t seen nothing yet.”

If you were looking for a dinner guest to place between a bishop and an ambassador, you could do a lot worse than Tasha de Vasconcelos. model, actress and on-off squeeze of Prince Albert of Monaco, she has the reassuring air of someone who knows the correct way to eat a Ferrero Rocher. Well before pudding, his grace/excellency will undoubtedly compliment de Vasconcelos on her loveliness, and she will inform him with grave simplicity that it is what is inside a person that counts.’

Only the extravagantly lovely can get away with the ‘inner beauty’ shtick, and de Vasconcelos does it with such charm that you find yourself nodding at this great truth. ‘Beauty is a gift,’ she continues. ‘Anything beautiful is something to admire. Maybe all you can do is look at it. But there’s a pleasure in that.’

In the lobby of the Lanesborough Hotel, lap-tops whir unregarded as businessmen swivel to watch her graceful progress to a corner table. Impeccable in a knee-length camel coat and Jil Sander boots, de Vasconcelos looks like a cross between Jackie Kennedy and Liz Hurley’s classier younger cousin. When waiters rush to present her bottled water in an absurd silver container she accepts the tribute as if she never drinks out of anything else.

Best known in Britain for her role as Paul (Dennis Pennis) Kaye’s model girlfriend in the BBC2 marketing agency sitcom Perfect World, de Vasconcelos is keen to expand her acting portfolio. She recently starred in Largo Winch, a Bond-on-a budget romantic thriller which played well to European audiences and will, de Vasconcelos hopes, be released in Britain later this year. Last year she appeared opposite Alfred Molina in a made-for-America television adaptation of Agatha Christies Murder on the Orient Express. Her character, an aristocratic Russian jewel-thief who turns poor Poirot’s head, raised the hackles of Christie aficionados because she does not appear in the book. But her inclusion was worth it for the moment when de Vasconcelos glides through an Istanbul railway station in drop-dead couture to meet her lover. Even in outakes, it is easy to believe you are watching the birth of a screen icon. De Vasconcelos neither speaks nor emotes in the scene. Like Ursula Andress rising from the waves in Dr. No or Marilyn Monroe on her grating in Seven Year Itch, de Vasconcelos simply is.

For her part, de Vasconcelos is entranced with the magic of cinema. “It wasn’t really Istanbul,’she confides. “The railway scene was shot in Leeds. But that’s what it’s like in the business. Sometimes things look like something, but they’re really something else.’ Murder on the Orient Express fitted exactly with her idea of what a film should be: “I just love the glamour of old-style movies. As a child I watched Breakfast at Tiffany’s Roman Holiday, Doctor Zhivago. They were my yardstick, they were what made me dream.’

Glamour and magic were important in a childhood where reality was often brutal Tasha de Vasconcelos Mota e Cunha, to give her full name, was born in Mozambique in 1974 to a Portuguese father and English mother. The de Vasconcelos trace their ancestry to the conquistadors and family business in timber and railways provided every comfort of colonial life.

“The doors of our house in Beira opened right on to the sea and there were horses and animals and tennis parties. It was idyllic, but cuts into those memories are images of cruel violence. I was about nine years old when the Communists sent troops into Africa and I witnessed some horrible scenes. We had to leave Mozambique on a refugee flight and there were men with machetes at the airport. You grow up, and grow away,’ says de Vasconcelos, wrapping slender arms around her waist in classic straitjacket pose, ‘these things never leave you.’

The family started a new life in Canada, where Tasha endured the ugly-duckling adolescence which is de rigueur for models. ‘I was too tall, I had the wrong clothes and, when I spoke at all, which wasn’t often because I was tortured for my South African accent, I said the wrong things.”

For all her poise, de Vasconcelos can seem very young for her 27 years. Yet she has a degree in international relations, and, or to the point, has been around backstage at enough catwalk shows to see life in the raw. She was spotted, at the age of 19, by a New York talent scout while at university in British Columbia, and despite her family’s reluctance, embarked on a successful modeling career in Europe, appearing on the covers of Vogue, Tatler, and Elle and scooping lucrative cosmetics contracts. “I never really chatted much with the other models backstage,’ she says primly. ‘I was studying for my degree at the time; my friends in Paris were artists and writers and people who were doing all kind of interesting things. I love fashion. I very much admire the work the designers do and I’m flattered to be part of that, but the talent is in the designers, not in the models.’

It was Bunny Schpoliansky, a film director friend from Paris, who persuaded de Vasconcelos into her first film role four years ago-a glide-on part in Riches, Belles etc with Claudia Cardinale. She enjoyed it so much she signed up for acting classes in Paris and London. Now she divides her time between London and Monaco (where she ‘feels safe’). One senses that modeling has become distinctly infra dig. ‘ I used to be irritated when people did the whole “model-turned-actress” thing, but it doesn’t worry me now. After all, Audrey Hepburn started out as a model.’ Hepburn, with her commitment to humanitarian causes, is an inspiration. Among her extensive charity commitments, de Vasconcelos has worked as a roving ambassador for Unicef and the Nelson Mandela Children’s Fund. On 12 May she will act in An Enchanted Evening at London’s Theatre Royal, a gala performance of the music of Richard Rodgers on behalf of the Neuro fibromatosis Association. “It’s a way of putting something back,’ she say. ‘I’m particularly glad to be able to work for the Third World because of my own early experience in Africa. When people ask, “What does a roving ambassador actually do?” I answer, like Audrey Hepburn, that “I am here for the children.”
It is a queenly response. Indeed there is something of the minor royal in de Vasconcelos’s whole manner. Would she consider making it official and tying the knot with Albert of Monaco? (Rumour has it that Hola-the European Hello1-has the cover ready to go to print.) ‘I respect Albert and we remain good friends,’ she says with no-further questions finality.