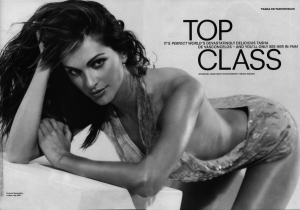 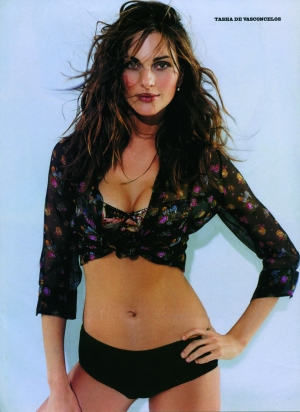 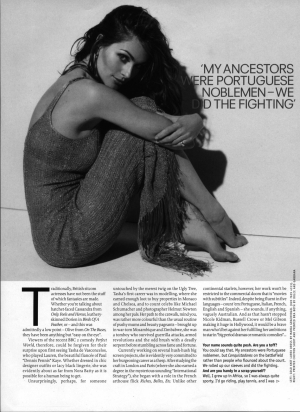 Traditionally, British sitcom actresses have not been the stuff of which fantasies are made. Whether you're talking about hatchet-faced Cassandra from Only Fools and Horses, leathery skinned Dorien in Birds of a Feather, or-and this was admittedly a low point-Olive from On the Buses, they have been anything but "easy on the eye".

Viewers of the recent BBC 2 comedy Perfect World, therefore, could be forgiven for their surprise upon first seeing Tasha de Vasconcelos, who played Lauren, the beautiful fiancee of Paul "Dennis Pennis" Kaye. Whether dressed in chic designer outfits or lacy black lingerie, she was evidently about as far from Nora Batty as it is possible for a human being to get.

Unsurprisingly, perhaps, for someone untouched by the merest twig on the Ugly Tree, Tasha's first career was in modelling, where she earned enough loot to buy properties in Monaco and Chelsea, and to count celebs like Michael Schumacher and photographer Helmut Newton among her pals. Her path to the catwalk, mind you, was rather more colourful than the usual routine of pushy mums and beauty pageants- brought up in war-torn Mozambique and Zimbabwe, she was a tomboy who survived guerrilla attacks, armed revolutions and the odd brush with a deadly serpent before stumbling across fame and fortune.

Currently working on several hush-hush big screen projects, she is evidently very committed to her burgeoning career as a thesp. After studying the craft in London and Paris (where she also earned a degree in the mysterious-sounding "International Strategy"), she began with a role in the French arthouse flick Riches, Belles, Etc. Unlike other continental starlets, however, her work won't be restricted to the commercial doom that is "movies with subtitles". Indeed, despite being fluent in five languages-count'em: Portuguese, Italian, French, English and Spanish-she sounds, if anything. Vaguely Australian. And as that hasn't stopped Nicole Kidman, Russel Crowe or Mel Gibson making it huge in Hollywood, it would be a brave man who'd bet against her fulfilling her ambitions to star in "big period dramas or romantic comedies"…

Your name sounds quite posh. Are you a toff?

You could say that. My ancestors were Portuguese noblemen, but Conquistadores on the battlefield rather than people who flounced about the court. We rolled up our sleeves and did the fighting.

And are you handy in a scrap yourself?

Well, I grew up in Africa, so I was always quite sporty. I'd go riding, play tennis, and I was always trying to compete with the boys on my bike. I've still got little scars from grazing my knees so much when I fell off.

And did you ever come face-to-face with a ferocious animal?

I stepped on a snake once when I was playing in the backyard with my sister. I screamed immediately, because it felt soft and I knew it was a snake, not a fallen tree branch. Luckily it was a puff adder, which can be deadly, but it takes longer to strike than, say, a black mamba. I leapt backwards and kept away until the houseboys chased it off. But most of the time, actually, I was more frightened of the baboons. They used to come to our kitchen window to beg for food, and they'd gang up on our dogs.

I was really young, but I remember having to flee Mozambique at three o'clock in the morning. We rushed to the airport to catch the last plane out of the country. Bombs were going off. The guerrillas were roughing everyone up with machetes, and my father had to stay behind, because there was only room for the women and children.

You have a home in Monaco. Can you watch the Grand Prix for free from your balcony?

Sure but I'm not really a big Formula One fan. I'm not into all that fast Ferrari thing myself-I just drive a cute little Renault Twingo. And in London I love taking the bus and seeing all the sights. I'm a real tourist-the Tower of London, Big Ben, Beefeaters-I love them all!

Have you ever chanced your luck in the casino?

Once or twice, but I'm no professional. I remember playing blackjack once, and getting 21 after three cards. I was so happy, it was fantastic, but then the dealer got 21 as well, and he had to explain that I hadn't won after all. I was saying, "No, no, I've got 21, I win," and everyone laughed at me.

In Perfect World, you played a sexually-liberated minx. Are you like that in real life?

A sexually-liberated minx? Hmm, if you want to put it that way. I'd say I was very warm, passionate and southern. How's that?

As a former jet-setting model, have you ever had any hairy moments in the air?

A few, yes. Once, on a tiny plane in India, things got so scary that the stewardess started handing round these little packets of herbs to calm us down. I can't say it helped! And when I was flying from Paris to Nice, there was a terrible lightning storm, and we couldn't land because the plane in front of us had crashed onto the runway in flames. We got low on fuel and started diving, and I really thought I was going to die. But I said a prayer, and it obviously wasn't my time to go.