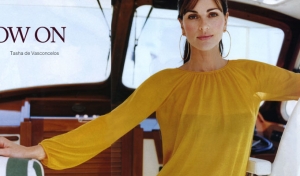 Hurry aboard for this season's classic cruisewear, modeled here by Prince Albert of Monaco's close friend Tasha de Vasconcelos The girl most famous for her "Are they or aren't they"? relationship with Prince Albert of Monaco, grew up in colonial Africa, the daughter of an English mother and Portuguese father.

When she was in her early teens, her family moved to Canada, where she studied international relations before falling into modeling. Though highly successful-she worked for almost every major designer- she knew it wasn't something she wanted to do forever. "It was fun, 'she says. "I made some good friends, but I never felt it was my road." It was on a modeling job in Paris four years ago that her road changed, when she was approached by director Bunny Schpoliansky to star in her film Rich Belles etc. She immediately began studying at the Cours Florent in Paris and the London Method School. Now, at 27, she is excited about her latest role in Largo Wynch, a film for American television due for release this spring. "I play a feisty, fiercely independent writer called CJ Flynn," she explains, her eyes flashing in a way that says it's not a character too far from herself. So, any future roles she has her eye on? "I'd love to work with Merchant Ivory - one of those romantic, period epics.' But until that blockbuster comes her way, she will be better known as the girl on Prince Albert's arm. Tasha, who divides her time between Yorkshire terrier, Scarlet, in London, and Monaco, first met Albert a couple of years ago at a charity function and their friendship has held the media's attention ever since. Both share a commitment to working with organizations such as Unicef and they recently took part in a pentathalon together for the Monaco Red Cross. When asked about the relationship, Tasha pauses before saying, in a rather considered way: "I respect him immensely. We have a great friendship and a lot in common. He lives by a sportsman's code of ethics, which I admire." Purely platonic then? But what about the rumours of a soon-to-be -announced engagement? 'They are unfounded today.' She says, with a flash of those eyes. Summer Litchfield