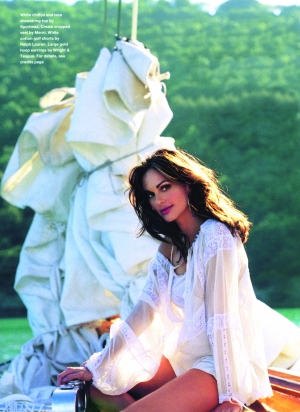 Style Interview
IN STYLE Magazine - Beauty and the boat

If actress Tasha de Vasconcelos was a boat she'd be this one: sleek, classy and with staying power. Much like the clothes she's wearing...

Lying on the deck of a 1929 teak America's Cup J-boat in the Med , up-and-coming actress Tasha de Vasconcelos is feeling right at home. "The boat is so beatiful - it really has that old-world glamour feel," she purrs -"old-world glamour" being shorthand for de Vasconcelos's personal style. Splitting her time between London and Monaco ( where she is rumoured to be dating Prince Albert), de Vasconcelos graced covers and catwalks as a model until a friend gave her a part in the French film Riches, Belles et Jolies a few years ago, and acting school and agents soon followed. Currently filming Dot the Eye, alongside Amores Perros star Gael Garcia Bernal, de Vasconcelosis steadily building up a CV that includes roles opposite Alfred Molina in Murder on the Orient Express and BBC comedy Perfect World. Still, she says , " I love fashion, I always will." In other words, though she's in the acting game for the long haul, she sees no reason not to look good while learning lines. It wasn't accidental she ended up on the chicest racing craft in existence. " If I was going to compare myself to a type of boat, then this would definitely be it."

"I'd say that I am classic and feminine with a twist. I love safari chic. I think that comes from growing up in Africa. The sportmax blouse I wore on the shoot had that feel,"

"A safari jacket is something that I can't live without, I have the most fantastic, vintage YSL one that my stylist found. I also wear a lot of crisp white shirts (I have quite a few by Ralph Lauren) and a lot of black turtle-necks ( John Smedley and Dolce & Gabbana make really good ones)."

"I've spent a lot of time in France and I think that I've been influenced by that. Audrey Hepburn had great style and Jackie Kennedy also has a lovely, classic look. She was inspirational, a simple, feminine dresser."

"London is fantastic for shopping. When I'm there, I head to Browns and Koh Samui, they're fun because they stock so many different designers. I also like APC, The Cross and Paul & Joe."

I love Gina shoes , although I don't like wearing a really high heel. Tod's make great flats and Emma Hope does lovely ballerina pumps. I have a fantastic pair of leopard-print ones that I wear all the time."

...ON DRESSING FOR SUCESS

"Minimise rather than maximise. Every woman has a best asset, be it your shoulders, legs, neck so work with it. Style is so personal. My tips are ... 1. Wear your clothes. Don't let them wear you. 2.Never follow trends - if you have style you won't need to. 3. Get a good tailor

"warehouse, Gap and M&S are all brilliant. I did a Marks & Spencer campign, and wanted to walk off with some of the clothes. Muji is good for basics, and Petit Bateau makes the best T-shirts in the world.